This Sunday I went to the San Francisco Great Dickens Christmas Fair with my Lacis co-workers, and it was lots of fun!  I grew up going to Ren Faire but I had never been to Dickens before and honestly I prefer Dickens…. For one thing the Northern California Ren Faire is at Casa De Fruta which might challenge Death Valley for the hottest place in the country, and that’s not a pleasant time in a bodice and three layers of skirts.

Although there were many things I liked about Dickens, one of the most hilarious was this: a shit ton of people thought I worked there, and asked for pictures with me.

If one paid attention it would have been pretty obvious that I wasn’t working the event– for one thing I wasn’t having very loud conversations in a terrible cockney accent across a passageway.  That, at Dickens, is a pretty good sign.

(Aside: am I the only one who hates the fake accents at these things?  Almost no one can do them well and if we were actually in London we would think of the people around us as talking normally. I find the costumes and the smell and the lighting to be much more helpful to give an atmosphere than a distressingly bad accent.  But whatever)

Now, there were lots of people there in costumes of various kinds, but even a lot of my co-workers who were dressed up were not getting accosted the same way I was.  Why me?  What was giving off the aura that I was a participant? 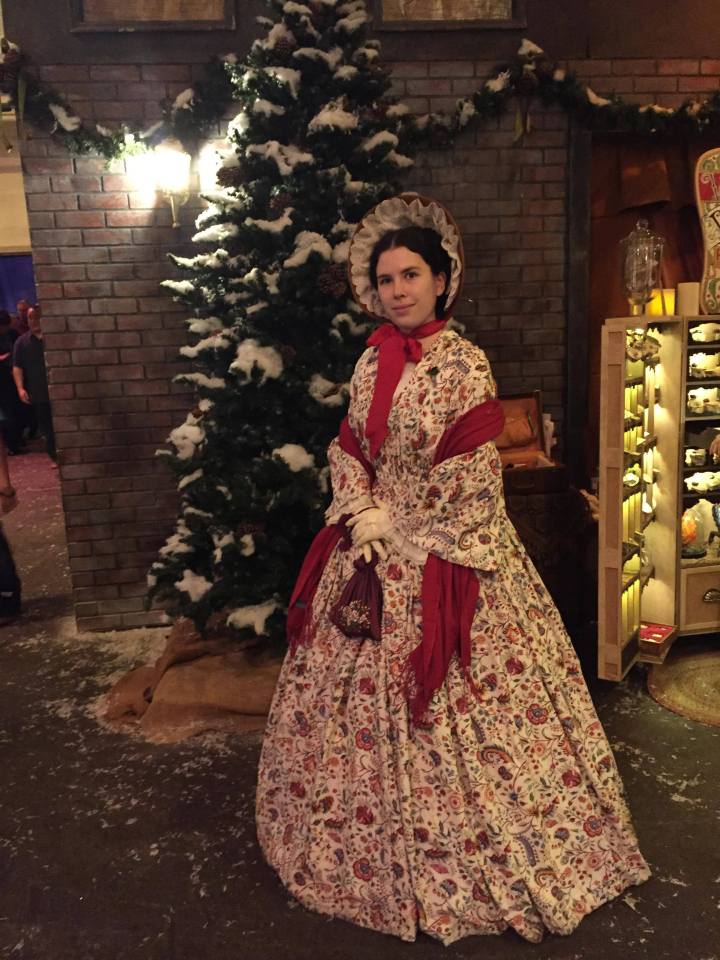 Now I am not a costuming expert, but I am an obsessive perfectionist, and here are the details that I thought really made the costume:

Dickens is supposed to be outside and in 1856 (the year I picked for my costume) no person would be walking around outside bare headed.  My bonnet was not actually that accurate in shape (it was $7 on ebay) but trimming the inside with gathered eyelet and adding a big ribbon made a huge difference in how it looks.  I saw a woman wearing the same bonnet I had, but untrimmed, and it didn’t feel historical the way mine does.

Same deal as headwear.  No woman would have been out in the streets (particularly in the winter) without gloves on.  Mine are vintage and belonged to my grandmother and vintage gloves are surprisingly cheap on etsy and ebay, even leather ones.  It is easier to find them if you have small hands though.

This is more of a costuming detail, but I saw a lot of people with big pagoda sleeves like mine and no undersleeves.  It’s easy to think that that is historically accurate, because a lot of museums display dresses like this without them, but if you look at old pictures they always wore undersleeves.  It’s a small thing.

I definitely saw some people with odd hoop contraptions…. if you don’t have the time or money to make or buy a hoop, or you don’t care, that’s just fine!  But I’m assuming you’re reading this because you do care, and the skirt silhouette makes a huge difference in the “look” of your outfit.

I took a modern 6-bone ruffled hoop and modified it slightly to make it easier for me to wear and to improve the shape.  I am extremely short, so I sewed a tuck in the top of the hoop before the first bone so that I could walk without stepping on the hem.  This made the first bone proportionally bigger, although I am small enough that it looked a little too large.  Sliding the ends of the wire past one another by about 3″ brought it to a nice dome shape.  I also reduced the bottom one a bit to fit the Dickens 110″ hoop rule and to get a smoother fall.

Since this hoop had ruffles I didn’t bother with a petticoat and just wore an antique chemise and my corset.  I highly, highly recommend getting a cotton hoop if you want to buy one (Lacis sells them!) as I was hot enough without adding synthetic fibers into the mix.

No woman over the (approximate) age of 12 would have worn her hair down.  I was originally planning on doing one of those hairstyles with the braid loops over the ears that I associate with a young Queen Victoria, but when I looked at English Women’s Clothing in the 19th Century (a fantastic resource for year-by-year fashions), 1856-1858 hairstyles were center-parted low buns with a wave and a lot of volume at the sides.

I have butt-length naturally curly hair and was perfectly happy to let it do all of the work.

Of course, if you are wearing a hat or a bonnet, what your hair is doing doesn’t matter that much.  Definitely don’t have it down, though.

I thought the shawl added a nice touch, since it was supposed to be winter, but that’s not too much of a deal.

Keep in mind that if you want to wear an evening gown (low neck and off the shoulder) that that would have been worn outside with some sort of cloak/cape/shawl/paletot.  The dress I’m wearing doubles as a dinner dress (it has a deep v-neck) but I wore a high-neck lace trimmed chemise underneath to make it day-appropriate.  A chemisette would also have worked.

I also used a historically accurate pattern to sew the dress, which helps, but often times the accessories make a huge difference.  I could’ve worn a modern wide-sleeved blouse and full skirt, but with the bonnet, hoop, gloves, hair, and corset, it might actually read more period than a Truly Victorian pattern in a completely implausible fabric with no accessories.