In the style of “boyfriend narrates my makeup/hair/nails videos” on YouTube, here I shall narrate the relevant pieces of my parent’s London trip.  I’m skipping all of the food, wine shopping, and watching of plays/musicals.  This is strictly textile-related.

Thankfully my mom is an art history buff and LOVES the V&A, so they spent a lot of time there and took a lot of pictures.  If you are planning on going to London in the near future the Dior exhibit comes highly recommended, to the point where my engineer father even thought it was fabulous.  That’s saying a lot.

To be honest, they have about 50 bazillion photos of this Dior exhibit, and while they look gorgeous I don’t have enough context to really talk about them.  PRETTY DRESSES, PRETTY ROOMS, I don’t know, that’s all I’ve got.  Let’s move on to stuffs I know about 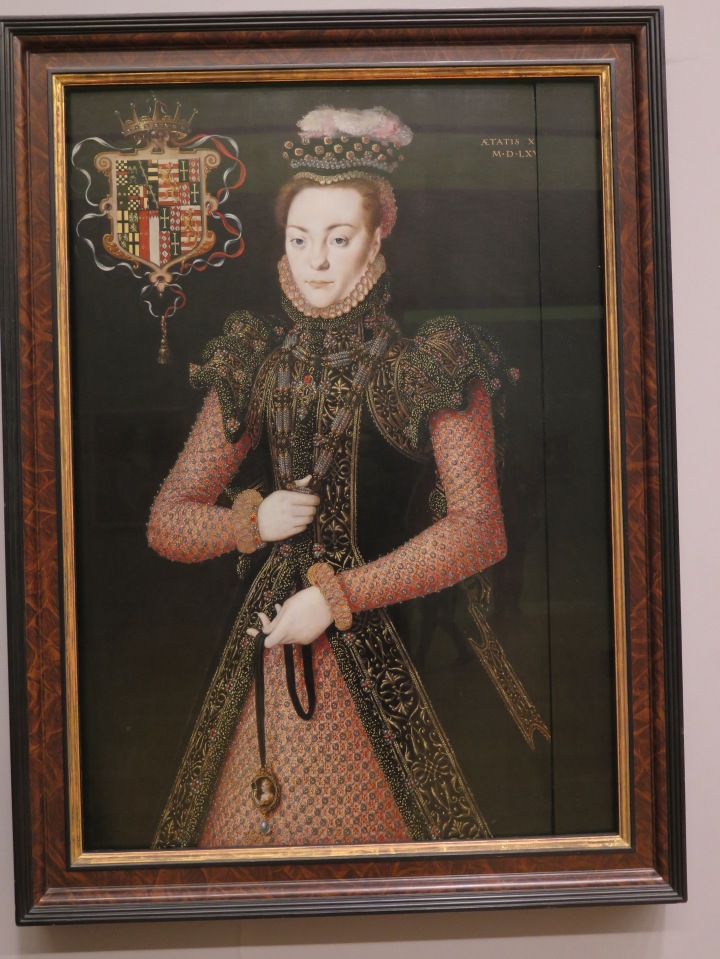 Portrait of an unidentified lady 1565-1568 by Hans Eworth.  Not sure what drew my dad to this painting, but I love her sleeves!  I’d also never seen this one before– the other portrait they got a picture of was the “A Young Lady Aged 21, Possibly Helena Snakenborg” portrait which is very well known.  Hadn’t ever seen this one!

This jacket is a little bit later–1620s ish–but I like the surprisingly modern pattern of the silver embroidery and also, of course, the bobbin lace.

When I first saw this picture I thought it was the corporal box with similar lace, but this is a baby wrap I’ve never seen before.  Look at those spangles!

A fresco from c. 1510 Italy.  The trim treatments on the dress in the front and the sleeves in the back look a lot like some of the dresses in Das Trachtenbuch and I hadn’t seen quite this look in Italy before.  They’re pretty!  I do love these giant sleeves and I want to do a split version like this at some point.

A nice depiction of clothing in early Tudor England (Henry VII) which I feel like I don’t see represented as much as later 16th C England.  There was a lot of change between Henry VII and Henry VIII in terms of construction, headgear, silhouette, etc. 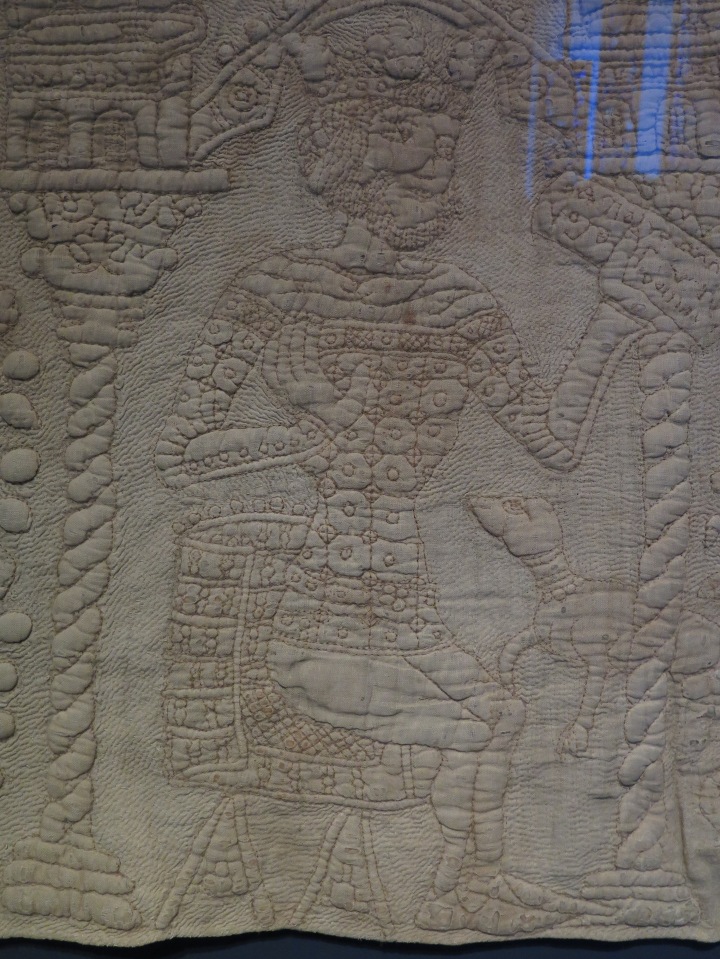 I’m pretty sure my mom took a picture of this for herself, not for me, give that it is a quilt.  That being said it is a 14th Century quilt.  If you had asked me when quilts originated as a thing, I’m not sure what I would’ve said, but probably something later than that.  Not sure who this is or what he is wearing, but yeah! 14th Century quilts!

I lost the label for this, but it’s a 16th C tent stitch slip I’d never seen before– there are a few others I have pictures of, but I really like the subtle yellow shading on the lemons.  I was gifted a piece of linen canvas a while back and I want to do a tent stitch sweet bag at some point, so it’s good to have more references.

They took a lot more pictures, and apparently it was actually helpful for them to have embroidery/costuming pieces to focus on for me, as otherwise the V&A is overwhelming.  I still haven’t made it there (ughjhgkjhgkjhgksjdhfksjhdfka) so I can’t speak to that personally, but I’m glad I got this little peak.