You ever start out doing something that’s supposed to be simple and you end up in waaaaay over your head?

I have 2 yards of a lovely changeable apricot/olive green silk that I bought at Discount Fabrics before I moved– technically it’s a shantung/dupioni silk with slubs, but it’s pretty non-slubby so I figure it’s close enough that I can use it.  I figured it would make a great waistcoat-jacket-doublet thing to wear over my kirtle and under my fitted gown when it’s cold and I need an extra layer.  I can also wear it alone with the kirtle if I don’t want to deal with the gown and separate sleeves and the kirtle stomacher.  Ok, cool.

Hang on a sec though– for this I’m aiming for 1570s-1580s English gentry woman– not nobility but someone with enough money to afford nice clothes.  Maybe a wealthy lawyer’s daughter.  But when did jackets start to show up?  How were they constructed? 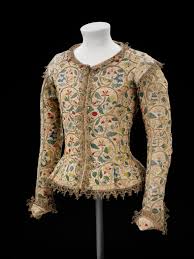 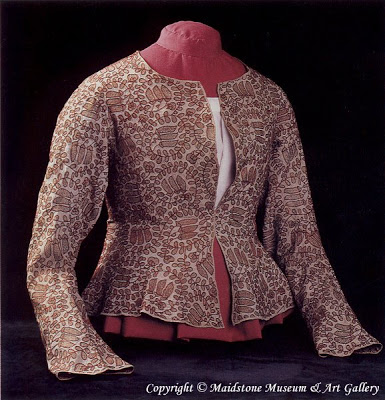 This looks plausibly like a waistcoat!  Sadly the bottom is covered by her apron, so it’s not entirely clear how long it is or if it has godets. This lady is sadly far in the background of this scene so she doesn’t have a ton of detail, but she’s clearly wearing some kind of jacket with an apron tied over it, and a skirt that is a different color.  It doesn’t look like it has much of a collar but I can’t tell anything about waist seams/peplums/skirts/godets. This one is a little bit different.  For one, it has puffy sleeves that are clearly gathered into the sleeve head, while the others have sleeves that are smoothly set-in.  You can also see that it has peplum-y skirt tabs instead of inserted godets, which is the first actual depiction of the bottom of a jacket that we’ve actually been able to see.

So having looked a bit at extant garments and period depictions of garments, I decided to cheat a little bit.  This is not an area that I’m actually interested in doing a ton of research in!  I just want a jacket to wear under my gown, dammit. So I started looking at what other reenactors and costume historians have done to make these.

Laura Mellin lists jackets with godets as something worn by English women in the 1580s.  Samantha McCarty has made one for her work at Jamestown, and there’s a pattern for one in the Tudor Tailor.  However when I spoke to Daniel Rosen, who has worked at the Plymouth Plantation as a tailor, he states that there’s no evidence of non-embroidered jackets with godets, and that they didn’t exist prior to 1600.  The jackets in Aertsen paintings just flare from the waist using the fabric that is present.

So now I have four people that I trust implicitly in terms of their research and they don’t agree with each other, and I really don’t have the bandwidth to dig too deeply into this.

Logical supposition– if embroidered jackets with godets existed, there were likely non-embroidered versions that did not survive.

Less-logical supposition– based on the Aertsen paintings it doesn’t look like these jackets end at the waist, so they must have some sort of skirt/peplum/tab thing.  We have one obvious depiction of tabs, but given the puffy sleeves I’m more inclined to call that style a doublet than a jacket (the differentiation has to do with front points and stiffening and it’s a whole things).

Logical supposition– Ok, well, if they don’t end at the waist they have to flare somehow otherwise they won’t fit over the skirts and hips and bum rolls etc.

Godets are a logical explanation, and we don’t have evidence against them.  Given the fairly extreme hip-spring in some of these paintings and skirts, I’m not convinced we can get enough flare without them.  But…. come on, they’re a pain.

So here’s my plan.  I took the Tudor Tailor pattern and scaled it so that it will hopefully fit me, and cut slits where the godets would be inserted.  I’m going to try the mock-up on over my kirtle and see how much flare is actually needed and whether I think I can get that without godets.  If I can’t, well, ladies in 1560s Antwerp probably couldn’t either.  Yay for experimental archeology!