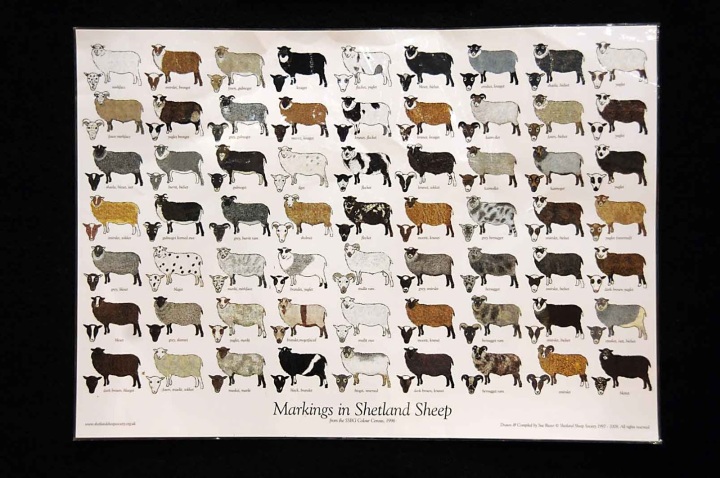 I was really extraordinarily surprised when my last post (cough RANT cough) about the history of colored sheep, a topic that is normally considered to be esoteric beyond belief, conjured a lot of interest in a follow-up. So Jason, Ari, and Randall, wherever you are, this is for you.

It’s pretty common knowledge that a lot of the fabric used in Europe pre-17th and 18th centuries was wool. And that seems pretty straightforward until you talk to a spinner and they let you know that there are approximately 3987392 different varieties of sheep, each with their own fleece type, body conformation, milk capacity, etc, etc. So. What did the sheep of the middle ages look like?

Well, it turns out, as usual, that we don’t really know. Unlike a lot of other kinds of animals there are very few kinds of sheep that have not been bred or modified in the intervening 400 years. Also, while you can determine the conformation of a horse from period images, sheep tend to just look kinda white and puffy. Not terribly helpful.

I was talking to my dad, ever the engineer, about this issue a couple days ago and he suggested that we run a DNA sequence on the Herjolfsnes finds and compare that to the DNA of modern-day sheep breeds to find what is most similar. I reminded him that he spent his career in micro-machining in Silicon Valley, where funding is, if not easy to obtain, at least available. No one, and I do mean no one, is going to shell up to sequence a bunch of archaeological finds to satisfy me and the ~3 other people who actually care about this.

But we do know some things about the history of sheep:

1. Merino sheep, the father of all modern fine wools, were developed in Spain. 99% of the sources I’ve read including all of the actually fiber-related ones claim this happened in the 16th century.*. While this wool was exported during the end of our period, it was very expensive. Queen Elizabeth’s stockings are said to have been made of much less fine (but domestic English) down wools.

So. For most medieval re-enactment, all fine wools are out. For spinners that means pretty much everything you can get easily. No Merino, Cormo, Corriedale, Rambouillet, Polwarth, or, if you are me, any of the happiness available in spinning.

2. We are pretty certain that there were down wool and long wool breeds available, but they might not look like their modern-day equivalents. Sheep have been kept in the Cotswold area of the UK since Roman times, but they might not have looked like modern “cotswold” sheep. Most breed standards were only developed in the 18th or 19th centuries.

3. We know for certain that primitive double-coated sheep were around and that their wool was used.

You see, like how carrots were originally these scrawny little things that humans bred to be large and orange and yummy, sheep originally had really quite unpleasant hairy wool. Over time we have bred them to be more and more consistent and even and fine and nice and *insert picture of beautiful superfine merino with 20 crimps/inch here*.

A sort-of intermediate step between stone-age hairy sheep and the 10 micron stuff that Loro Piana buys for couture Italian suits is the double-coated sheep, which has a long hairy outer coat and a softer downier inner coat. A lot of animals, as it turns out, have hair like this (musk-ox fluff is lovely and amazing once you get past the gross foot-long outer hair) as it provides good insulation as well as weather-proofing.

We have a variety of documentation from archaeological sites (both Herjolfsnes and mainland finds) that show the use of double-coated wool in medieval fabric. Often, but not always, the two coats were separated and the stronger outer coat used for warp and sewing, while the softer inner coat was used for weft. If you are familiar with the traditional distinctions between worsted spinning and woolen spinning, this should sound familiar.

There are a number of primitive breeds that still exist in the world, including, but not limited to Karakul, Icelandic, and our focus for the day…. Shetland sheep.

Shetland sheep are an interesting example because there are true examples of un-improved Shetland sheep–double-coated and rooed or plucked instead of sheered– but unlike many of the other primitive breeds they are very well documented. They have not been cross-bred much (advantages of being on a couple of small islands that even in this year of our plague 2020 takes thirteen hours to reach on a ferry from Aberdeen) but because of the importance of the shetland shawl industry in the 19th C, we have lots of information on them.

Now to finally return to the topic of our last post on naturally colored sheep– Shetland sheep, one of our lovely probably-historically-accurate sheep, come in eleven distinct colors and thirty different marking patterns. If you want, you can find a poster of all of them printed on a tea towel, because the Shetland Sheep Society of the UK is nothing if not Extremely British.

The names for these colors and markings are one of the few places where the original dialect of the Shetland Islands is preserved, and because there aren’t words for “reddish-brownish sheep fluff” in other languages, they are actually quite commonly used in the international fiber community. I think that’s pretty amazing.

It’s worth noting that Shetland sheep have not, for the most part, had the colors bred out of them. As I discussed in my last post, many breeds of sheep were culled of colors because white wool was more valuable and consistent (hence the term “black sheep of the family” for someone weird or unwanted). However, there was little reason to do that on Shetland. All the wool processing (even those famous shawls) was a cottage industry that was kept in individual families. The colors of the Shetland sheep are even featured in a specific style of shawl known as the Hap, which uses feather-and-fan stitches to feature all the lovely colors.

We’ve also come full circle, in a way– many small flocks now breed for color, as handspinners prize lovely grey, brown, silver, and black fleeces. Check out the prices that Nancy at Marble Peaks Ranch gets for her award-winning silver and black Corriedale crosses and try and tell me that colored wool is not as valuable these days as white.

*literally one book about the agriculture of medieval Spain says much earlier. I am not entirely convinced.