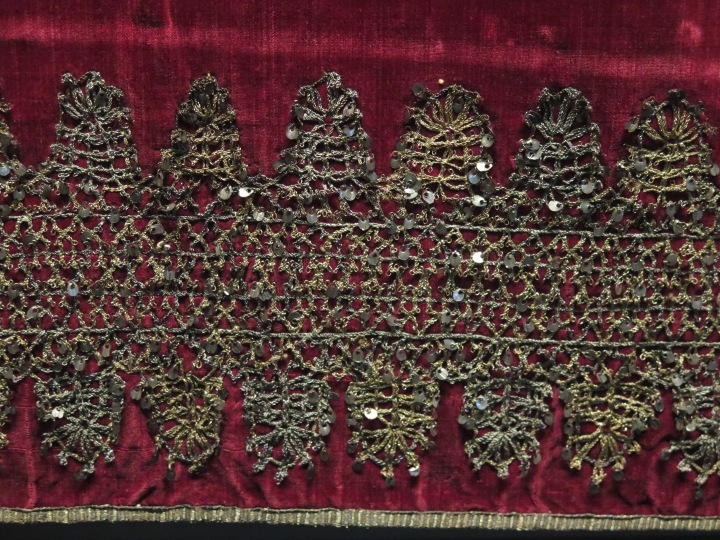 Psst: this is both a practice for me in getting my brain organized for my class in two weeks, and also to accompany said class with pictures, links, etc. Enjoy!

Hello, welcome! My name is Axera Coscolano and in the mundane world I work at a lace museum and nerd out over trims a lot. I realized a while back that while lace and lace-style trims were this huge development in the 16th century that completely changed how people thought about clothing and labor and decoration that I don’t see it used that much in the SCA, and I think it’s because it can be kind of overwhelming. It’s easy to know that modern laces don’t look anything like 16th century laces, but then not know what to look for when you do want an appropriate lace. So I put together this class and spent wayyyy too much money on samples.

I hate to be this person, I really do, but an important place to start is to really evaluate what we think of as “lace.” It can be a case of “you know it when you see it,” but I think most of us think of lace as a fabric with holes in it. Not a bad place to start. I know that before I started working at Lacis my idea of lace was pretty floral, mostly with denser flowers or leaves on a more open ground. Does that sound reasonable to you guys?

We’re going to run with “fabric with holes in” for the time being, although that can get us into trouble a little bit.

The first kind of lace I want to talk about is needle lace. This developed in Greece and Italy in the 16th century as drawn thread embroidery got more and more complex, to the point where there really wasn’t any fabric anymore. 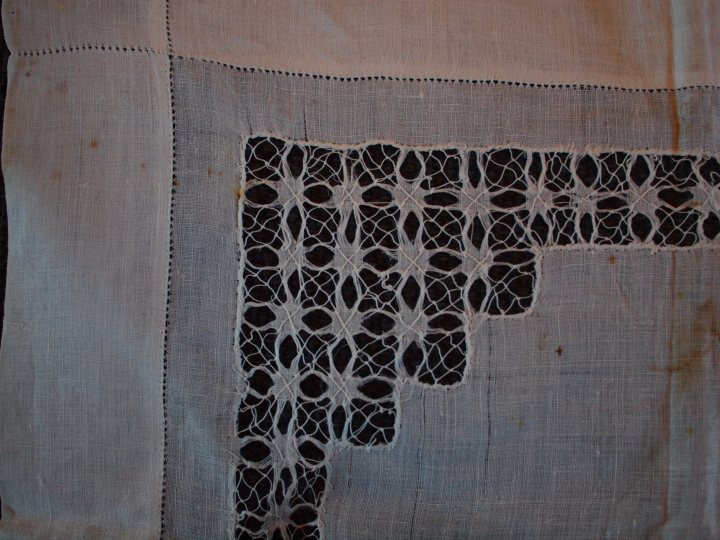 Eventually some smartass decided that they didn’t even really need that fabric, and needle lace was born. However, until the mid 17th century it stayed pretty geometric. Here’s a needle lace pattern from Vinciolo’s pattern book published in 1587:

If you’ve looked at Elizabethan portraits ever this should look very, very familiar– this is the only kind of lace used on collars, ruffs and cuffs until about 1570, when people started making bobbin lace in this style to save money. Needle lace is extremely labor-intensive and expensive, and was a huge status symbol. In the 17th century the Finance Minister for the King of France recruited lacemaker’s daughters and convinced them to move to France and start making lace there instead of in Italy since the court was spending so much money on Italian lace that it actually became an economic problem.

This is our first kind of lace, and this is the one that is going to be the hardest to find or replicate.

It’s hard to find much information on the origins of bobbin lace– some times it seems to have sprung fully formed into the world with the publication of the pattern book Le Pompe in 1557. That being said, I do have a theory about that, but first we have to get one thing out of the way.

Early bobbin lace looks NOTHING like what we think of as lace. It’s a plaited trim, almost more like a gimp or passementerie than anything else.

Here’s a sample I made from a pattern in Le Pompe– it’s quite heavy and geometric, and it doesn’t have a fabric portion (called a ground) that you find in later laces. It’s still kind of fabric with holes in, but there’s much more “hole” than “fabric.”

Once you know what to look for you start seeing this stuff all over the place in portraits of the 1550s-1570s. One of the best examples is this portrait of Christine of Denmark. ALL of that is metallic bobbin lace demonstrating a classic motif from Le Pompe of feathering:

I will mention quickly that there is some scholarly debate as to whether or not the patterns from Le Pompe and other similar books were solely executed in bobbin lace. A portrait of Queen Elizabeth in Janet Arnold’s Queen Elizabeth’s Wardrobe Unlocked with very distinct feathering is described as having been done in a couched cord. There is also a lacemaker who works with the Met in New York who has come to the conclusion that many of these patterns were worked that way as well. 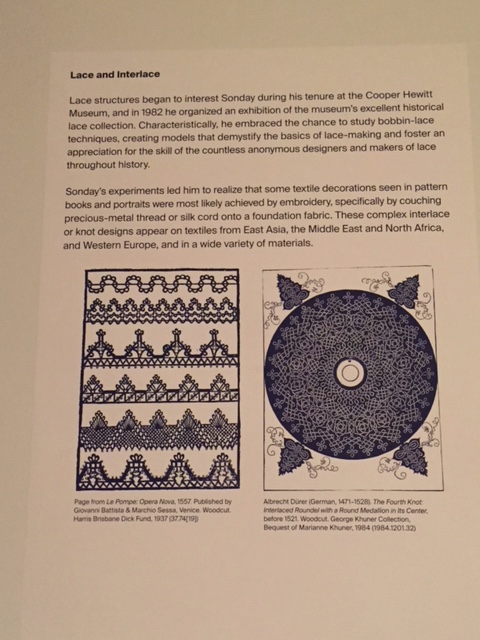 I am not going to get in between experts in this field, but I will say that all of these patterns can be worked in bobbin lace and doing so would have allowed lace to be removed from one garment and transfered to another relatively easily, allowing the recycling of clothing we know to be common in the 16th century. Also there are some extant pieces of bobbin lace with feathering, including a corporal box from Italy at the V&A and a number of bed hangings at Hardwick Hall in the UK.

A quick mention of the 3rd kind of lace: Many of the late 16th century pattern books have gridded patterns like this

These are for a kind of lace called filet, caused by filling in meshes of a square net made exactly as one would make a fishing net. We know this existed because we have patterns for it, but it was used almost exclusively for furnishings. You do occasionally see netted “laces” in portraiture– Levey argues that a partlet of Eleanor de Toledo is filet, although I would argue it is merely netted– but never something figural like this. Unfortunate, since hand-made filet lace remained popular until the 1920s and is actually relatively easy to find.

So now we’ve made it to the “finding it” part. First things first:

As far as I know, no one is making Le Pompe style bobbin lace for re-enactors. No one. I’ve looked. If you want that effect you’re going to have to use something else.

The only place making replica 16th century needle lace that is wide and intricate is The Tudor Tailor. You can sometimes find crocheted edgings that will work, but they’re relatively narrow. The Tudor Tailor’s lace is chemical lace but as long as you don’t have me with my face four inches from your ruff you’ll be fine. Also I understand how hard it is to find this stuff! You can find needle lace relatively easily (Lacis has hundreds of place mats and tablecloths) but it’s the later style– very fluid and floral, and not appropriate for ruffs.

Other kinds of lace are a little bit easier:

A very, very similar lace that I found at Tinsel Trading Co in Berkeley. Thin metallic edgings like this are relatively easy to find at specialty stores and can be used to trim clothes and gloves. There are also wider metallic edgings in appropriate styles: 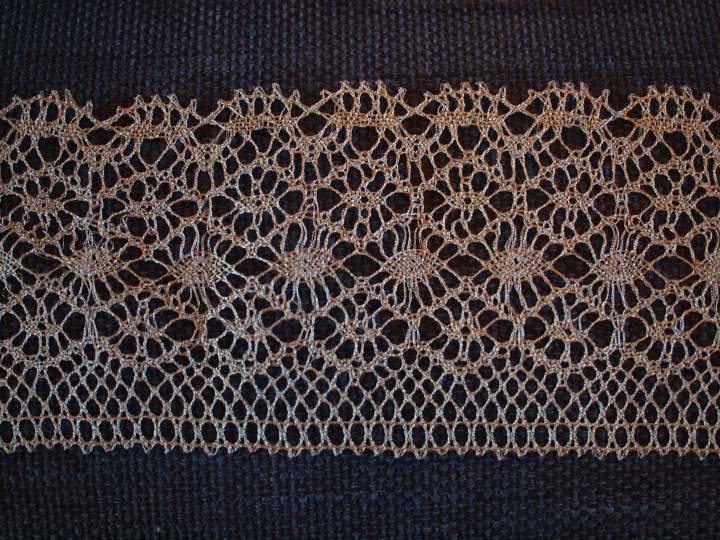 I got this at Britex Fabrics, and other than the fact that it is pretty obviously lurex, not real metal thread, it’s pretty good. It has the right braided appearance and a little bit of ground, but not too much. Remember, nothing floral. I’m not sure what I’d use this for since it’s pretty wide– maybe trimming a cloak? Something like this but smaller would be perfect for glove lace.

If you really want that appliqued Le Pompe look ala Duchess Christina or this portrait of Marguerite de Valois, you’re probably best off couching a silk or metallic thread in the correct design. If you wind your sewing machine bobbin with a perle cotton or heavy silk gimp and sew upside-down it looks remarkably like hand-couching. If you want to learn how to make this style of lace for yourself I highly recommend Gillian Dye’s books on 16th and 17th century lace. My favorites are Introducing Bone Lace and Surface Decoration in Silk and Metallic Threads.

Here’s the text of the hand-out I’m going to give at the class:

Tinsel Trading Co (etsy/retail shop)—Vintage and antique trims, sometimes they have appropriate lace. Can be expensive!

Tied to History (website)—not lace but their scroll trim could be a simple Le Pompe passementerie. Also real metal threads for reasonable price if you want to make your own lace

Lacis Museum—huge stock of laces, email asking for 16th century appropriate laces and I will dig for you

Britex Fabrics—they do have appropriate lace patterns, although they are quite lurex-y (no real metal). If this doesn’t bother you definitely stop in at their shop

You can also couch threads in appropriate patterns to mimic early bobbin lace in the style of Le Pompe and New Modelbuch.

Lace: A History—Santina M Levey, not cheap but worth it. Available from The School of Historic Dress

The English reprinting of Le Pompe is out of print and goes for ~$700 on Amazon. If you find it cheaper let me know. Lacis has a German version of the 1562 edition for $25.

I have yet to find anyone specifically making 16th century bobbin lace for re-enactors. I do make lace on commission occasionally (apologies for the shameless self-promotion).