Many of you will remember my friend Darrin, of the stupidly-complicated-device and lack-of-garb.

(His SCA name is Rav, which leads to the convenient mnemonic of us as Rav4 and Ex-hera. Ie the Toyota Rav 4 and the Nissan Extera. Blame Laurie, but it helps)

This is the garb I made him approximately a year ago. Thirteenth century Swedish, ish, it’s not exactly the most well documented period.

Darrin is totally capable of sewing–in fact he is arguably better equipped than I am with a modern sewing machine and serger. However he is yet to cut out the cloak we bought fabric for last May, so I’m taking over his garb.

I’m also dragging him into the 14th century because

A) The clothes are more interesting and

B) I can actually, reasonably use the Herjolfsnes finds.

On that note I made him a hood using scraps of fabric from my speed surcoat lined with leftover fabric from William’s pelicaning shirt.

Spot the random hair of mine lovingly lit on his liripipe.

I struck a deal with him that I’d make him garb if he bought the fabric (since I no longer have a source of income) and we decided on a BEAUTIFUL, GLORIOUS slightly heathered grey wool Ermenegildo Zegna twill on clearance.

I’m making D10581, aka the short-sleeved surcote with the double pointed gore at the front.

Although Darrin is almost exactly the size of the men’s small in Medieval Clothing Reconstructed the patterns are gridded on a 1 cm grid while my pattern paper is a 1″ grid. Therefore I couldn’t just enlarge it straight from the book.

Because the last surcote I made him fit pretty well I basically drafted the new one to be the same size. As you can see in the photo the surcote gore ends a little too high (it’s meant to start at the belt) so I had a choice to either move it down 2-3″ or move it up so it’s more intentionally at sternum height. Based on the proportions of the original I decided to move it up.

Then I just had to figure out how long and wide to make everything. For the measurements at the top of the gore panels and the side panels I roughly estimated 1 cm=1/2 in, figuring that was pretty close. The side panels are 9cm wide, so 3.5″ each, and the desired garment width at chest 47″, which made the front and back panels 16.5″ wide.

Feel free to check my math.

Yesterday I cut out and assembled the whole thing other than the sleeves, which I will need to draft from scratch. I probably chose the wrong way to insert the gores, because I couldn’t get the nice tongue-and-double-point. Looks like most people making replicas of this finish the tongue first and then essentially patch the gore in from behind, instead of inserting it.

I finished the neckline and worked a threadbar at the bottom of the slit to strengthen it. I’m using a very dark green silk and I like the subtle contrast it gives.

Oh, and it turnes out I can totally sew this fabric with my replica handspun sewing thread. 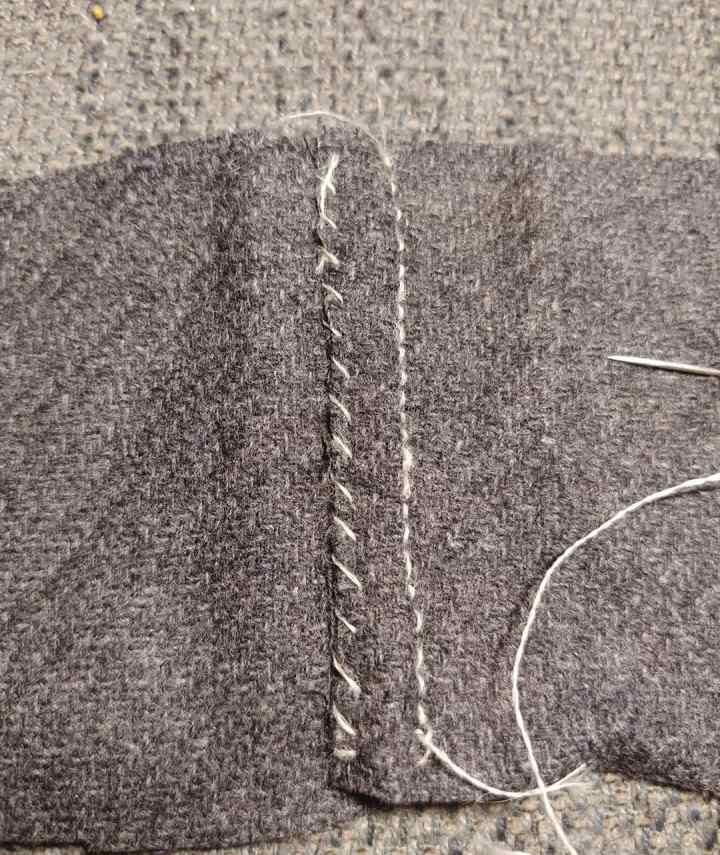