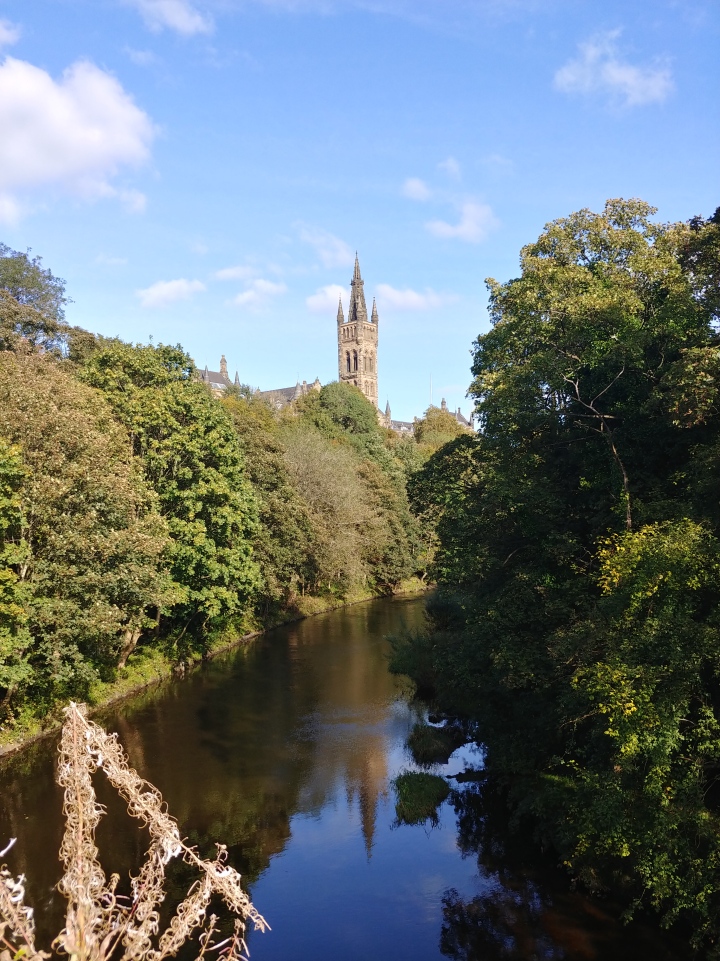 Hi everyone!  Sorry for my absence, I was doing my course orientation activities and my first week of postgraduate courses, so I’ve been pretty busy.

I was frustrated when I was researching this program and housing at UofG that I couldn’t find any information so I’m going to talk about that a fair amount…. if I say anything I’m not supposed to for any reason I guess we’ll know because this post will disappear!

I am living in student housing, specifically postgraduate housing.  This is Maclay

I intentionally ranked housing south of campus as my preference, since all of my textile conservation classes are at the bottom left-hand corner of the University.  For me it’s about an 18 minute walk, uphill on the way in but downhill on the way back, which is probably better.  This entire area just south of Argyle St is pretty much just student housing, other than a fire station and a primary school.

Every room in Maclay is for a single person and includes its own private bathroom.  Said bathrooms are tiny, but I am in no way complaining, I ran out of steam for shared bathrooms my second year of undergrad when someone left bits of meat from dinner in the shared sink.

Although the website says there are three-person flats, I’ve yet to meet someone who is in one.  I got lucky and I really like my flatmates, and the three of us who are girls have bonded particularly hard.  Slightly terrifyingly I am the oldest one here (at 26!!) and that and the fact that I baked cookies on the first day and took minutes of our flatmate meeting I am officially Flat Mom.  This is….probably accurate.

Glasgow weather is not as awful as people make it out to be, but it is definitely changeable.  Bring an umbrella.

The weirdest thing about moving abroad so far is grocery shopping.  None of the brands are the same, and if you are from the Produce Capital of the Known World (hi Northern California!) errr….. it feels a bit sad.  Everything is in plastic.  British strawberries are awesome, though.  So that’s a plus.

Within easy walking distance of Maclay there is a Sainsbury, Tesco, Lidl, tiny organic grocer’s and Morrison’s.  Waitrose and Marks & Spencer are a bit further but doable as a long walk or with the bus.  So far Morrison’s is the most like a grocery store at home.  The Tesco near us is SMALL but if all you want is chocolate milk or some beer it will do just fine.

(Beer is a thing here.  Such a thing.  People hang out at pubs at 3 in the afternoon.  I don’t drink, which I feel a bit awkward about, but people haven’t been pushy or weird so I appreciate that)

My program (or programme) (I really have to figure out how to turn on UK spell-check on my laptop) is very small– there are 8 people in my year.  Seven women and one lone guy.  I don’t know anyone very well yet, but I like them all so that’s good.  I definitely spent the first few days feeling like I knew absolutely nothing about anything ever, and a lot of the knowledge I do have (dating, techniques) is relevant but not super important for conservation at this stage.  I do think it will be more helpful later.

Although we have a wide variety of backgrounds I seem to be the only person who has a straight-up chemistry degree.  Granted, it’s been a while, but I think that will be very handy.  We did have to do a reading about how scientists aren’t special, and everyone can do science and it’s not intimidating, and science is completely relevant to conservation you art people need to get past this and learn about it and I felt that was perhaps slightly unnecessary for me.

The University library is fabulous.  That’s all I have to say.  In two weeks we have to give talks on different non-woven textile techniques (I’m doing bobbin lace)(because it’s Me) and I am seriously regretting leaving most of my books at home.  Not that I really had a choice, and the library thankfully does have Lace: A History, but it’s not the same as having your own.

[insert break to make a cake for our course social tonight]

[cake baking related note: eggs in Scotland are not separated by fertilized/unfertilized!  In most applications this wouldn’t be a problem, but it’s not ideal to have embryos in egg whites for a meringue.  Cue fishing around in egg whites for tiny pink things]

I’m not entirely used to the non-American style of school where ALL OF YOUR GRADED WORK HAPPENS IN LATE NOVEMBER AND EARLY DECEMBER.  On the one hand it makes a lot of sense– you get to spend a while learning and then use what you’ve learned in a real-world way, instead of doing lots of little assignments and exams– but damn.  I have all the dates written in my planner, and there is a lot of overlap between my classes.  I want to start working on things now, but for the most part I can’t because I haven’t got the background yet.  I’m going to start planning them as soon as possible though so I don’t get completely overwhelmed.

I hate hooks and loops. They’re…coming along?

And working on the Endless Coif

But I definitely don’t have enough done to really write about something.  One of my flatmates has already volunteered to take pictures of me in some of the 15th C buildings on campus so I can have Good Costume Photos!!™ for once, but I need to

finish things? Before that happens?  And I’m pretty busy.  Hopefully as the semester goes on I’ll get more used to the schedule and be able to be more productive after my classes end.