So it turns out that Costume College, while not my favorite experience socially, gave me a massive push to start sewing again, especially since I finally feel human again after my flu-thing from a few weeks back.

My priority right now is new garb for Great Western War, although I have some time and freedom right now to play a little bit and do some gifts and commissions.

Here’s the plan for GWW:

The first has a high gathered neck and full sleeves, a la 1520s.

This is also my camicia for 12th night, although I’ve realized what I thought was a neck frill in the Juan de Burgunya painting is actually a choker, and what I thought was the edge of a black kirtle is the neckline of a square-necked smock. OH WELL.

The other camicia will be the same as my first one but from linen and with a different neck finish.

I’m also going to make a waistless kirtle (the Spanish term is brial). It’ll eventually be an underdress for a Spanish/Burgundian hybrid gown but I can wear it on its own when it is hot. Like in SoCal in October, for example….

The last thing is a mid 15th century men’s pleated gown. I think. Still waffling a bit on this one.

I’m working on the first chemise right now and I might be losing my mind.

The whole thing is constructed with French seams since this is still an undergarment and is going to be washed. A lot. The seams were machine sewn and the rest is by hand.

It’s the collar choices that are questionable.

Yes, that is a ruffle enclosed in a collar. Then there is going to be another ruffle attached to the TOP of the collar. Instead of doing the sensible thing of hemming the top edge, gathering about an inch down, and applying a band over the pleats to hold them in place.

I didn’t do that. About the only advantages to this are:

I’m not willing to go back and start again at this point so unnecessarily complicated it shall be, which also means it’s not going in an A&S competition unless I can find an extant piece where someone did this.

UPDATE 8/3/2018: Turns out this is PRECISELY how collars were made in period. POF 4 pattern 1 is a boy’s 1535 shirt made exactly this way with a collar facing and separate ruffle. I can’t believe it.

The ruffle itself may or may not receive this bobbin lace 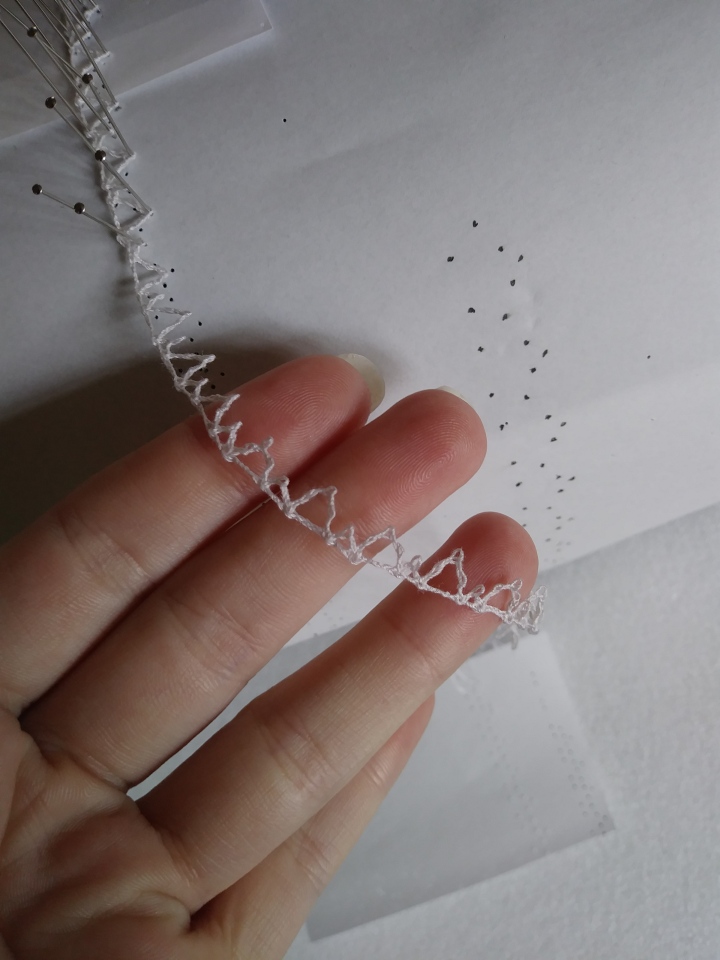 Mostly because I want to get the chemise DONE and not wait until I finish this nonsense. Also the silk thread is kinda a pain to work with.

This came to CoCo with me and I made a lot of progress. I might also be possibly making Darrin more garb because he has even less than I do and although he is capable of making his own I can do it faster and embroider the heck out of it.