We’re moving on to Part II of “weird shit Callie does while not sewing.”  For today’s nonsense– trying to make some sense of the 1589 Tailor’s Pattern Manual by Alcega.

This, along with Hispanic Costume, is the resource for 16th C Spanish clothing– a surviving manual on how to lay out all variety of garments on fabrics of different widths using a proportional tape system known as the “bara” system, since it’s based on the Castillian measurement of una bara as 33″.

For more on Alcega I highly recommend this blog

For how to actually use the bara system you’ll need The Modern Maker V1– Gnagy explains it way better than I ever could. But basically you use your chest measurement to derive a series of other measurements in proportion to it.  For example, here are my lengths based on my bust measurement of 32″

Theoretically, using these measurements, I can take any of the pattern layouts in Alcega and draft a pattern that scales to me.  Theoretically.

Psst: Technically you usually need a height tape too, but since my height of 5’1″ scales to a tape of 32″ anyway…. I’m good! Yay! Body made sense for once!

The first pattern I tried to scale from Alcega for me at 1/10th scale (on 10 squares per inch graph paper) was the farthingale.  This was a minor catastrophe.  I DID manage to make something of a reasonable size and shape, but I completely fudged the pieces, mostly because Alcega was using 22″ wide linen and that results in a lot of very strange piecing.  If you make the pattern as shown in the book, or as The Alcega Project seemed to do it, it turns out way too small.  I might be missing something terribly obvious, but using my cheat way I did make a lovely tiny slightly oval cone that would scale to a circumference of 107″.

This makes a hoop that is visually around 33″ wide at the bottom, which when scaled to my waist to floor measurement and how wide my waist looks from the front is a nice shapely cone that resembles that in portraits.  Awesome.  Moving on.

The first project I decided to try and scale is f 59a, for “a kirtle and low-cut bodice of silk.”  Since I wasn’t entirely sold on this drafting thing, I decided to do an experiment.

Using the indicated bara system measurements in the book, I drafted a 1/10th scale bodice on graph paper that should theoretically fit me.  Looks like dis:

On paper it doesn’t look too bad! But when I started counting squares, I found…. some issues.

My usual caveat– I have a weird-ass body type.  An ex-boyfriend who uh…. liked to look at scantily clad women… once asked me if I had seen ANYONE with my build photographed.  The only person I could think of was when Ally Raisman (the Olympic gymnast) had done a photoshoot for Sports Illustrated.  I think, if I were of a curvier and squishier build, this would very well have worked. 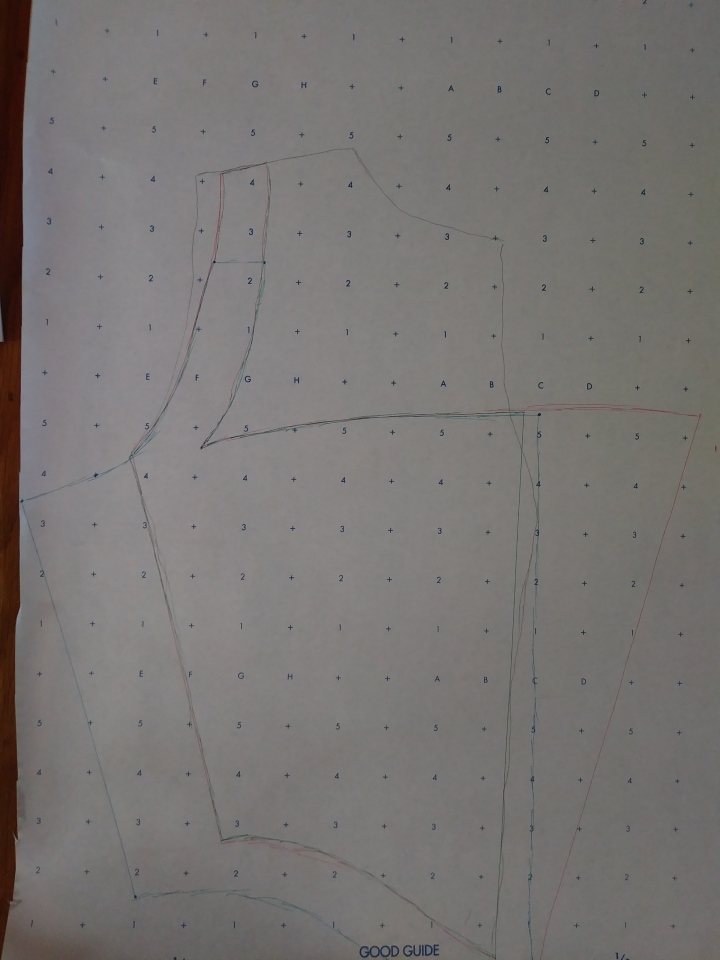 Sorry, there’s a lot going on, and my colored pens are skinny.  But basically we have four sets of lines.

Pencil– traced directly from the body block I made for my Hispano-Flemish kirtle.

Red– Using the proportions in Alcega, I drafted the bodice front on top of my body block trace, using it as reference for things like strap length.

Blue– a scaled-up trace of the bodice I drew on graph paper without my body block for any references.  Hence the stupidly short straps.

Green– hard to see, since it overlaps with a lot of stuff, but that’s what I would actually have drawn as a pattern for this style of dress on me based on my body block without using the bara method.

And, as you can see, both of the bara method styles makes a dress that would be about…. 6-8″ too big in the bust region?  Granted, I wear a 32B bra size, so there could be more going on in that area, but still. 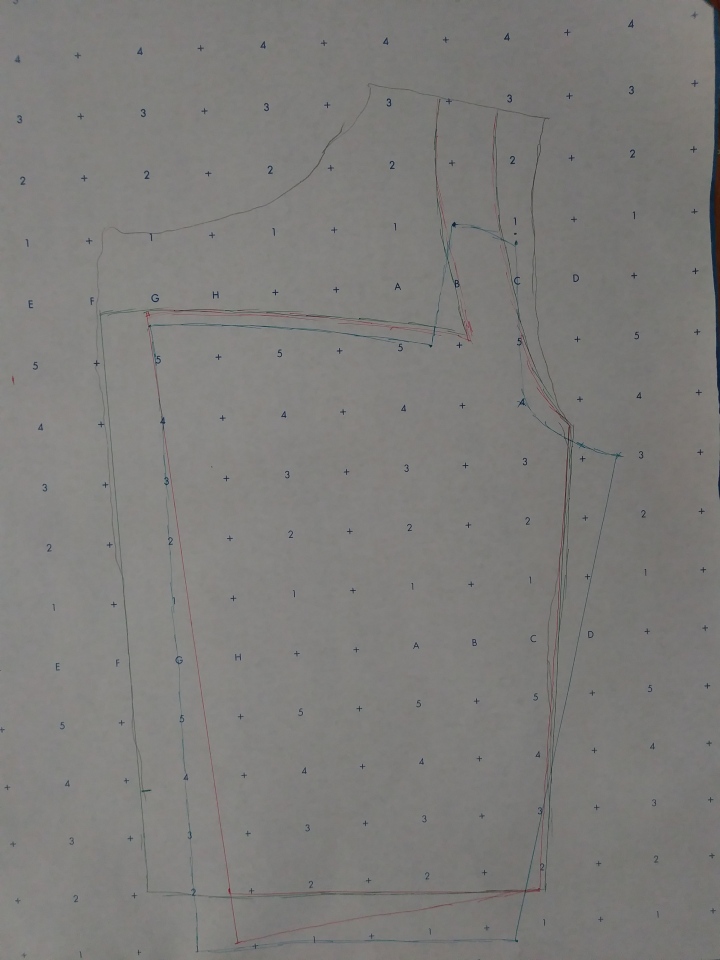 The various backs are much closer to one another, although you see the same issue with the stupidly short straps, and for some reason the red center line is WAY off the straight of grain.  Not sure why that happened.

I’m definitely going to continue to use Alcega as a resource, but for me, I think it will be more reliable to base my pieces on my body block with reference to his proportions for length, etc, without slavishly copying it.  And I’ll keep poking at that farthingale.

Ok, I think I know what I did wrong.  I was looking at the diagrams again trying to figure out why this didn’t add up, and I think the front is supposed to be t wide *at the bust*, instead of having the overbust edge be t long.  If the front bust is t, or 1/3rd of your bust measurement, and the back width at bust height is s, or 1/6th, that’s 2*1/3+2*1/6=1 bara, which is…. your chest measurement.  That would involve having side back seams instead of side seams, but that’s not that unusual.

That also makes a lot more sense since these diagrams would’ve been measured and drawn directly on the fabric with chalk and that’s a lot easier if you mark a starting point and then measure out t and down Q and trace the seams on once you’ve laid it out proportionally.